Tomorrow marks the beginning of our 13th week of pregnancy, so I figured I’d share the story of how Pat and I found out we were indeed pregnant!  This is what I wrote the day we found out, Monday, September 15:

Wow!  At 1:09 this afternoon I found out some information that will most certainly change the rest of my life.  Pat and I are having a baby!!  I went to the doctor’s this morning and had a blood test that came back positive.  It’s crazy. My period was 10 days late and we haven’t really been doing anything to prevent getting pregnant, but wow!  I was so excited/hopeful/nervous that I would be, but there were also so many reasons that I could have just been late – I’ve been working a lot of nights, I traveled cross country – one of the flights being a red-eye and it just didn’t seem possible that I really could be pregnant.  Well, I was wrong!   I had been feeling tired, but again, could have been a function of working nights.  I also was very queasy all weekend, to the point where Pat made breakfast Saturday morning and I had to leave the room because the smell of his delicious looking dropped-egg-on-toast made me gag.  I was scared to believe I could be pregnant, because I had taken two home pregnancy tests, and both were negative. About two months ago, I was sick with a sinus infection and paid a visit to my primary care.  Apparently they scheduled a follow up visit for this morning, which I knew nothing about until they called on Friday and left me a message.  By the time I got the message, it was too late to call and cancel the appointment (they charge you if cancel less than 24 hours before the scheduled appointment).  So, I worked last night and headed straight to the appointment.  The NP was awesome, I think she was almost as excited as I was – most of the patients in the office are elderly, so I think it was fun for her!  She ordered the blood work stat, and two hours later, she called and left me a message saying that she had good news and I should call her back.  I was sleeping and called her back at 1:09 this afternoon.  That’s when I got the good news!!  According to Naegle’s rule, mini marr is due to arrive on May 18!!  Telling Pat was awesome.  I couldn’t do it on the phone, so I waited until he got home from work.  We were in the office saying hello, he gave me a big hug and squeeze and I said be careful, you don’t want to hurt the baby.  He just looked at me, like yeah right.  And then I started crying, so he knew it was real!  It still doesn’t feel real and we just kinda kept looking at each other like, seriously?  We’re having a baby?  But we are!
YEAH!

Pat and I just returned from five glorious days in Bar Harbor, Maine.  We kicked off the week taking a trip down memory lane and stayed at the hotel where we got married last year.  It was pretty neat to be there one year later, and we had fun recapping our memories of the night … I still cannot believe it’s been a year!  Who would have thought that one year later we’d be the proud parents of Miss B and the expectant parents of minimarr!

Tuesday morning we trekked up to Maine.  The ride was just under 6 hours, but through pouring rain almost the whole time.  Not fun.  Pat did all the driving (he’s so good) and we were there safe and sound by dark.  The inn was perfect so we settled in and then headed to dinner.  The package we booked included three dinners at the Bar Harbor Inn which was incredible.  Fancier than we anticipated (the book at our hotel said no jeans.  Of course, we brought jeans only).  We decided that since it was off season we’d risk it, and luckily it wasn’t a problem!  Our only other option would have been to buy “dressy” clothes at Walmart.  I’m glad it didn’t come to that!

Our main focus of the trip was to visit Acadia National Park.  It was pretty amazing. We decided to do a self guided tour, so bought a CD and set out to explore the park.  We managed to spend two days there, so I’m glad we didn’t pay for the two-hour tour!  One of our favorite spots was called Bubble Rock.  It’s basically a huge boulder left by a glacier thousands of years ago that balances on the edge of a mountain. 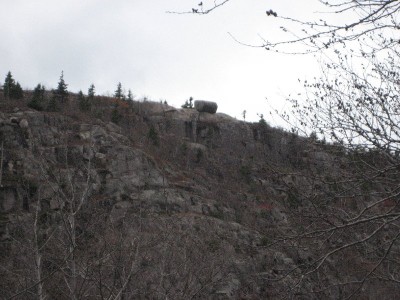 We decided it was worth hiking up to, and it definitely was!  Here’s a picture of Pat pushing it off the mountain.  Despite the fact that we were told it’s been there for thousands of years and never budged, I was convinced it would fall when Pat touched it, haha! 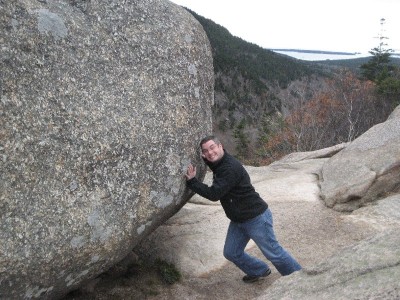 Luckily, it didn’t budge!  Friday morning was set to be sunny, so we watched the sunrise on Cadillac Mountain.  From October 7-March 20, it’s the first place in the United States to see the sunrise!  We felt pretty special.  It was cold watching it rise, but from the summit of Cadillac Mountain we could see fishing boats in the water, and figured they were way colder than we were! 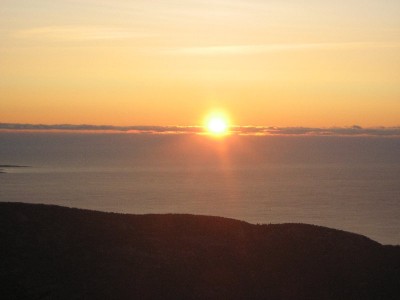 We capped off our trip with some shopping in downtown Bar Harbor.  It’s an adorable little town, with all sorts of boutiques and shops.  A lot of places were closed for the season, but there was still a pretty good selection of stores open.  Our favorite was Bark Harbor, where we bought some treats for our baby, who no doubt missed us terribly while we were gone 🙂

Saturday morning we headed home, with a stop at my parents to pick up Bailey and have dinner.  Binkie came, and Kris was home for the weekend, so we had a great time.  Lots of laughs (per usual) and just a nice relaxing family dinner! The poor dogs were tired, but still managed to get some scraps.   On Saturday alone, B went to the park with my mom, for a run with my sister, and then to the golf course with my dad, Pat and I.  Needless to say, she was exhausted.  I have never seen her so tired in my life.  It was awesome!  Her new bed from LL Bean had come while we were gone (she ate the first one, but you gotta love LL Bean; we sent them the old one, and they shipped out a new one at no extra charge.  You can’t beat it!), so we got that all ready for her, and she slept like a baby.  It was pretty funny.  All in all, it was a great week and we’ll both be sad to return to work on Wednesday! 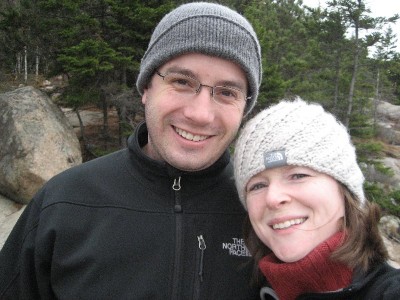 Well, today is our one year anniversary!  It’s hard to believe that this time last year we were waiting with wedding day jitters for our big moment!  I look back and wish we could do it all over again, it was such a great day!  It’s been such an amazing year, and I truly cannot believe how fast it’s gone by.  We were commenting that a year ago, Bailey wasn’t even part of our lives yet!  I have no idea what we did without her, but she certainly made our first year of marriage fun and crazy!

The hotel where we got married offers a “complimentary” stay on your one year anniversary, so we’re going to take advantage of that and then head up to Bar Harbor, Maine for the rest of the week.  Not quite the tropical paradise of our honeymoon in Playa Del Carmen, but we’re looking forward to some R&R and some quality time together!  Sadly, no dogs allowed 🙁  Miss B will be spending the week with my parents and Maggie, her favorite friend.  I’m sure they’ll have fun (the dogs anyway), but we’re going to miss the little nugget!  I’ll leave you with some pictures of the big day! 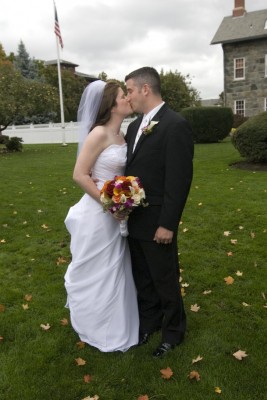 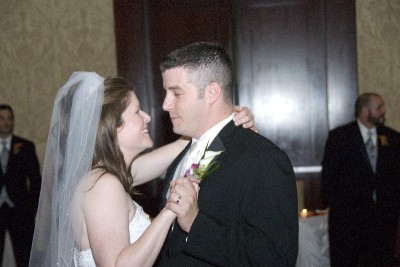 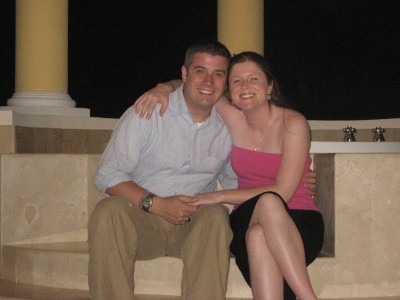 LausPatAndBailey from Patrick Marr on Vimeo. 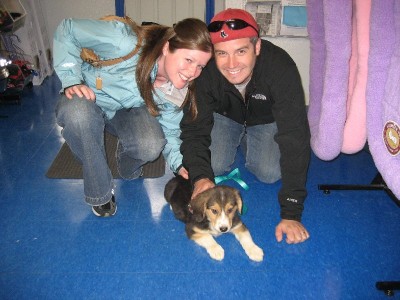