This is by far the hardest post we’ve had to write, but we learned some sad news last week and felt it was time to share with all of you … our precious little baby has Trisomy 18.

Trisomy 18 is a chromosomal abnormality/genetic defect – essentially a fluke – second only in occurrence to Downs Syndrome.  Sadly, Trisomy 18 is considered “incompatible with life”.  Most babies die before birth, and the few who do make it typically live just a few minutes, hours or days.  A very small number of babies (<10%) live at least one year.

At this point, we don’t know what the future holds for MiniMarr, but are planning to carry this little baby as long as he/she will allow us to.  We know the outlook is grim, but we’re holding on to hope and praying that God will guide us.  We are so sad to know that our little baby won’t have the life we dreamed of, but we still love him/her very much and just ask for your love and support.

Despite the incredible loss we’re experiencing, we know how lucky we are to have such amazing family and friends and we are beyond grateful for them.  We especially want to thank our parents and sisters for being such an immense support to us over the last week.  We know how much they are hurting too, but they’ve been so strong for us and we truly would not have survived without them.

If you’re interested in more information, the Trisomy 18 Foundation is an excellent reference.

When it rains as heavily/consistently as it did the last couple of days, we have the unfortunate problem of flooding.  Not our basement (thank goodness!) but our neighborhood.  We live at the bottom of a small hill, on the corner of two streets.  Both sides completely flood, so we’re essentially stuck at our house when it’s really bad.  A few cars almost always get stuck in the water, which results in the street being blocked off at both ends, and cops at either end to make sure no one tries to pass through.  Luckily, Pat and I have two driveways, so can usually manage to get both our cars in one or other, depending on where the flooding is worse.  Here are a few pictures of our luxurious waterfront property: 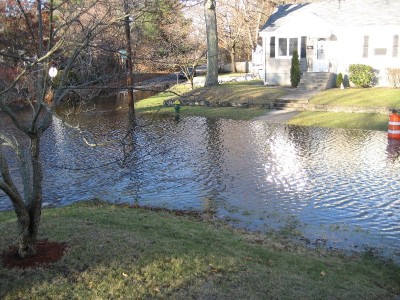 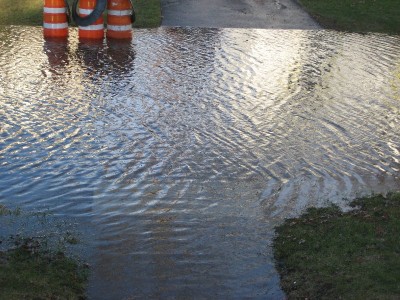 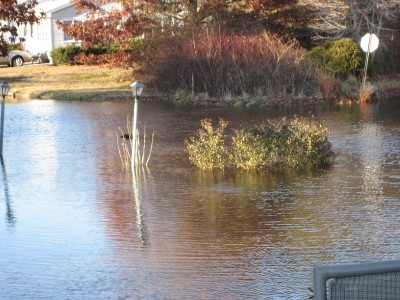 Bailey is petrified of the water.  She apparently thinks it poses some sort of imminent danger and therefore won’t leave the yard when the water is there, which is actually quite convenient.  Generally, we do not let her outside without a leash (she has a tendancy to want to run away and explore other parts of the neighborhood).  When the water is there though, we can stand on the deck, she’ll run out back and do her business as fast as possible, while fearfully looking at the water like it might eat her.  She’s very tough.  Last night, Pat and I met up with some friends for dinner.  When we got home, it was late so Pat quickly took Miss B outside – off her leash.  Unfortunately, it was pitch dark outside and Bailey didn’t remember that the water was there and apparently couldn’t see it.  (For those of you that know B, you know nothing she does is slow.  Everything, whether it be eating, drinking or running down the stairs, is done at warp speed).  In her typical spastic manner, she tried to run away and was quite surprised when she landed in the ice cold water!  She has never swam before, but after sputtering around for little bit, she quickly learned!  She was one wet, cold dog, but Pat and I could not stop laughing. She just had this stunned look on her face … it was priceless.  Hopefully it means that she’ll become quite the swimmer this summer down the Cape and in Maine!

After drying out overnight, B had a photo shoot today for her 2008 Christmas card, it was very exciting and we got a few great shots … we’ll keep you in suspense until they’re mailed out!

In baby news, I had another appointment this week (17 weeks) and everything looks good!  MM’s heart was ticking away at 155 beats/minute.  I asked my MD about the theory that boys have heartbeats less than 150 and girls have heartbeats greater than 150, and he said there was absolutely no truth to it, so I still have no inclination whether it’s a little boy or a little girl in there, but I suppose we’ll know soon enough!  May will be here before we know it … and, we have an ultrasound scheduled for the first week in January, so will get to take another peek at our little peanut – we can’t wait!!

Hope everyone had a great weekend!  Stay warm 🙂

For the record, Bailey is generally not allowed on the couch.  But if this blanket goes anywhere near the couch, she knows it’s hers and that it is okay to jump up.  It cracks us both up!  And clearly in this picture she is not pleased that I disturbed her!

In baby news, MiniMarr is 16 weeks along, and about the size of an avocado – which of course means that Pat asks how the guacamole is every time he sees me 🙂  So far the guacamole is excellent!  All my friends tell me I should start feeling him/her move in the next few weeks, which I am pretty excited about!