With all the hustle and bustle over the holidays, Pete’s nap/sleep schedule was off.  He had a few late nights where he fell asleep in the car on our way home. One night, he was out cold when Pat carried him in the house and brought him upstairs.  As he groggily woke up just a bit, he looked around and asked “where is me?”  It was adorable and I thought a fitting title to give a little update on the man himself!

Pete is two years, (almost) nine months old and such a funny, lovable, sweet, smart little boy.  And all boy he is!  He talks more than anyone I know and his vocabulary amazes me daily.  He seemingly forgets nothing and will use words far beyond his little self, yet he always uses them appropriately.  He talks in complete sentences, is unfailingly polite and has the cutest, sweetest voice I’ve ever heard.  His imagination is incredible and he is constantly making up stories and telling us these elaborate tales – mostly about construction vehicles.  He loves to be dada’s helper and is always using his tools and fixing things around the house. We’ve gone to Lowe’s several times over the last few weekends and to get ready for one of our trips, he put all his tools in his pockets and then made sure he wore his construction “coat” … he cracks us up:

Pete is fiercely independent.  We often hear ” NO mama/dada, I do it ALL BY MYSELF”. He likes to pick out his own clothes and would wear the same monster truck t-shirt (see above photo) every single day if we let him.  For the most part, he’s pretty easy going and will accept guidance, but on the days he doesn’t, we just cross our fingers and go with it. There’s been a few doozies, but generally nothing is too awful!

Pete loves to read and we often watch him in his crib in the morning reading books to his animals. He’ll read book after book and make up his own stories as he turns the pages. They’re pretty close to the real thing too and it’s so cute to watch and listen to him. He knows all his letters and loves to point out the letters on pretty much everything – stores, t-shirts, signs.  Pete is also quite the singer and constantly belts out the toddler hits. Sometimes we’re allowed to join in, other times he likes to sing alone. Christmas carols were a huge hit and car rides are very entertaining with all his singing and story-telling. He loves driving on the highway and checking out the big trucks and is becoming quite the backseat driver.  He tells us when to go, stop and slow down depending on the traffic lights and if he catches you with one hand on the steering wheel, he’ll scold you “two hands, mama”.  We are in big trouble when he figures out the speed limit!

Pete loves Bailey (except when she’s trying to steal his food) and loves to hug her and snuggle with her on the couch. This is a common sight in the early mornings at our house: 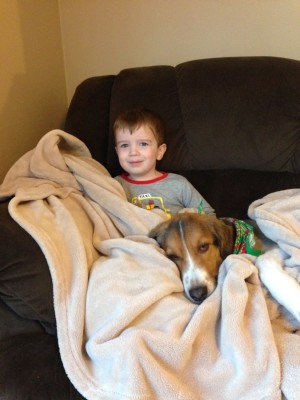 He is (finally) slowly coming around to the idea that he is going to be a big brother.  Lately he’s been very sweet hugging and kissing my belly and loves to do belly bumps.  He always refers to the baby as a her, so it will be interesting to see if he’s right! Despite his reluctance at being a big brother, we know he is going to be great.  He is so kind and caring and always wants to help people; it’s one of my favorite things about him.  Anytime Pat or I are sad, he gives out hugs to make us feel better.  It’s adorable and there is not much better than a Pete hug.  There’s been no real sign of the “terrible twos” but I don’t think we’re out of the woods just yet!

Pete tends to be timid and shy when exposed to something he’s not quite sure about. But he almost always warms up and sledding was no exception. He’d only been sledding once before we were with the PC gang at the Herrick’s house a few weeks ago.  He was hesitant to try, but once he found this “driver” he was all smiles and loved sledding; it was awesome.  Thanks Erika for sending the pics! 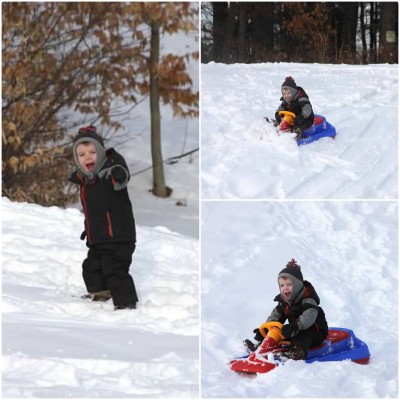 It’s hard to imagine life before Pete.  He has made life so full, and just so much better.  It is nearly impossible to put into words how special he is. I know we’re slightly biased, but he really is just the best.  And I know for a fact that we are better parents to Pete because of Brienna. We appreciate everything about him and truly know just how lucky we are to experience life with him.  He is the best thing that’s ever happened to us and we can’t wait to see what’s in store for the future!