Thanksgiving came and went in a blur this year.  I can’t believe it’s almost December already … Pete and I talked a lot about who he was going to see on Thanksgiving this year.  He was very excited to see his Nana, Bumpa, Lizzie, Aunt Maureen (Aunt Mo-Mo) and Nana Quinn.  Over the summer, Nana Quinn taught Pete to say “giddy-up!” when he sat on his rocking horse. So the day before Thanksgiving, he asked me if giddy up was going to be there.  And now that’s what he calls Nana Quinn.  Sometimes, he calls her Q, which is equally adorable.  We sing songs at night about all the people that love him, and without fail, when I mention Nana Quinn now, he stops, smiles at me and says “giddy up”.  It’s pretty cute.  They have a special bond and I love it. 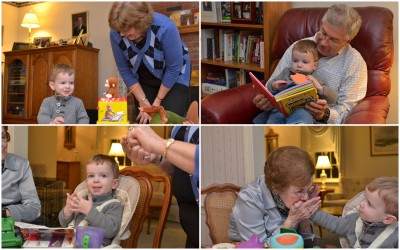 We in the Marr house are thankful a lot; our families and friends especially, but most certainly for Pete.  He has changed our lives so much and I am forever thankful that I get to be his mom.

Pete is officially a toddler.  It’s scary that he is no longer considered an infant, let alone a baby.  I cannot believe that he is 18 (almost 19) months old already!  As much as I miss Pete being a baby, he is at such a fun age now.  He talks all the time and one of my favorite things is listening to him wake up in the morning.  His eyes pop open and he instantly starts talking (usually about dump trucks, school buses, fire trucks or ambulances – he is such a boy) in his sweet little voice until he calls for Mama or Dada to come get him.  He is a mischievous little guy sometimes and I found him like this after a nap the other day: 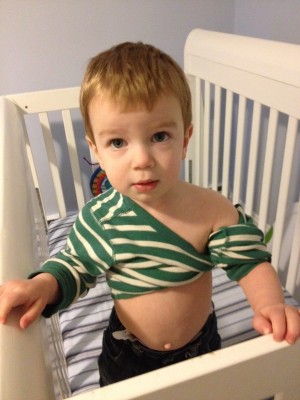 Pete is sweet, funny, and such a happy guy.  He is always saying hi to people and his voice is so cute but can be so loud at times.  He tends to repeats himself until he gets what he wants and a common occurrence is at the grocery store when he sees someone he wants to talk to and says “hi. hi. Hi. HI. HI. HHHIII” until said person acknowledges him.  Then he usually gives them a big smile and a wave and moves on to his next target.  He loves the ladies and is such a flirt.  He also loves to look at pictures of himself and watch videos of himself on our phones.  I take full advantage of this because it’s guaranteed cuddle time, which I cannot get enough of. 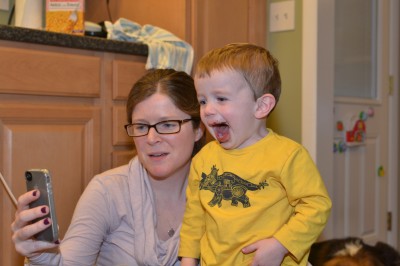 Pete’s been a busy guy and learns so much every day; he’s like a sponge.  He hears something once and then it seems to be committed to memory.  He knows all his body parts but is particularly fond of belly buttons.  Kris and I were watching an infomercial for an exercise video the other day and when the trainer patted someone’s pudgy stomach, Pete yelled “ding dong!” and then laughed like crazy.  He cracks me up.

Pete loves to mimic other people, he loves to be in on the joke and he loves, loves, loves Bailey.  They are best buds and we are so lucky that she is so tolerant of him.  I love watching them together and am so happy that we have a Bailey for him to grow up with. 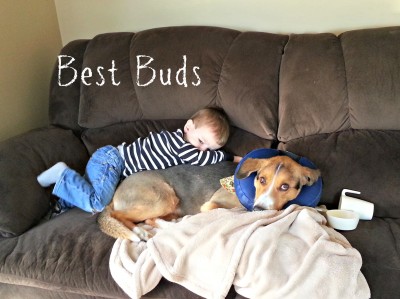 Pete is a huge fan of bath time and asks for a bath at least three times a day.  We limit him to just one, but he spends as much time as possible splashing, swimming and playing with his toys.  Then it’s pajamas “jam-jams”, books and cuddle time.  Pete’s so affectionate and I’m trying to savor every minute of it, because I know it won’t last.  When he’s hurt, scared (or getting in trouble), he opens his big blue eyes as wide as can be and asks for a hug.  It’s impossible to resist, and I am pretty sure he knows it.  Luckily for all of us, we’re happy to oblige!