Pete is five months old!  No doctor’s appointment this month, so no official stats to report, but he continues to amaze me on a daily basis. Pete babbles, smiles, laughs, rolls over and seems pretty close to sitting up on his own.  He kicks his legs like crazy when he’s excited, he squirms all over the place (he is strong!) and is just a curious, happy little guy. He doesn’t want to miss a thing and it’s pretty darn adorable.  He grows more enthralled with Bailey every day, and has figured out that he can grab her fur when she’s close to him – which is all the time since she doesn’t let him out of her sight – note the paw in the bottom right corner of the picture below: 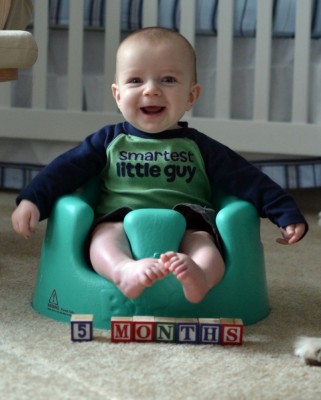 Here are some pictures from his visit to Nana Quinn’s last week.  The poor guy had his first cold and wasn’t totally himself, but we still had a fun visit:

As my mom said, Pete on a “bad” day is still awesome. I couldn’t agree more. He makes me so happy and I can’t believe that he’s already five months old!

Pete went on his first plane trip this weekend!  My mom, sister, Pete and I flew to WI on Thursday to visit my brother and his family.  Here’s the little man waiting for takeoff with Kris: 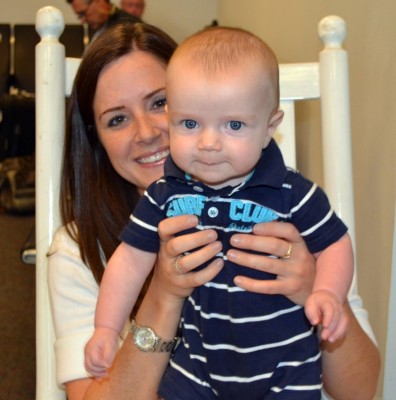 Pete was so good on the flight.  He was his typical happy-go-lucky self and entertained everyone sitting behind us.  Several of the people on our flight Thursday were on our flight home Sunday and when one couple spotted him, they exclaimed “Peter!!  Oh my gosh, I think you grew since Thursday!”  He rewarded them with a big smile.  Pete was fascinated looking out the window of the plane; it was adorable. 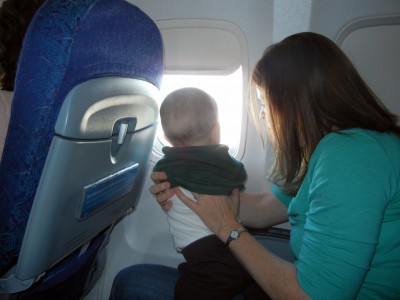 We had a pretty busy weekend, but a lot of fun. We spent Friday at the house with the Reece and Lena while Quinn was at school and Tim and Jenny were at work: 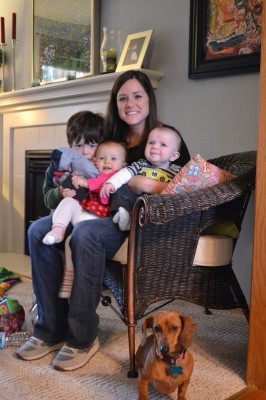 We tortured poor Pete with Lena’s new headband … he was very skeptical at first, but warmed up to it rather quickly.  He made a pretty cute girl and will someday hate us (me) for this: 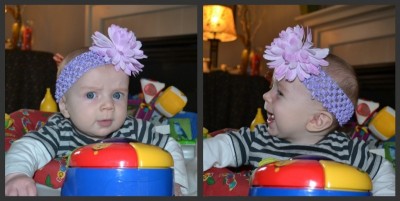 Saturday was a perfect fall day so we went downtown for lunch to State Street Brats (a top ten college sports bar, according to Playboy Magazine). There was a Badgers game, so the place was packed.  The people of WI really do love their football and we saw some pretty funny Brett Favre t-shirts.  My favorite is in the collage below!  After lunch, we walked around downtown before going to the UW student union.  It’s pretty amazing.  It overlooks Lake Mendota, so after treating ourselves to ice cream (made by the dairy science majors), we treated ourselves to a pitcher of beer outside on the patio by the water. 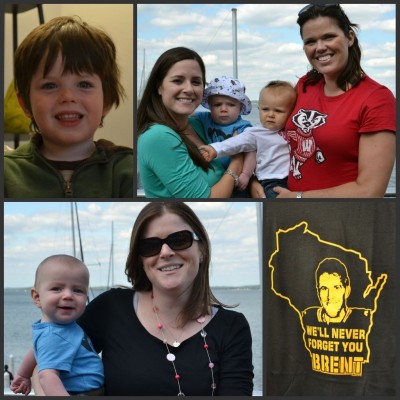 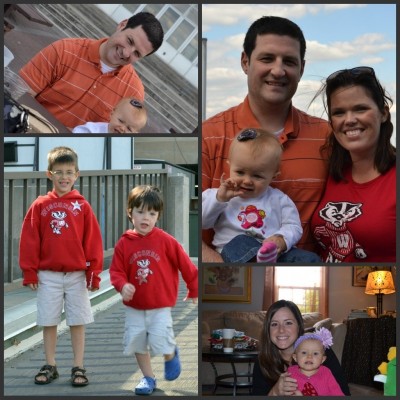 Kris and I were eager to check out Super Bike and weren’t disappointed. We even got Bana on it!  It’s not as easy as it looks to be towed but we had a lot of laughs and poor Tim was probably exhausted after towing us all over the neighborhood:

The most challenging part of the weekend was getting a picture of all the kids together … Pete was occasionally overwhelmed with all the commotion/chaos. 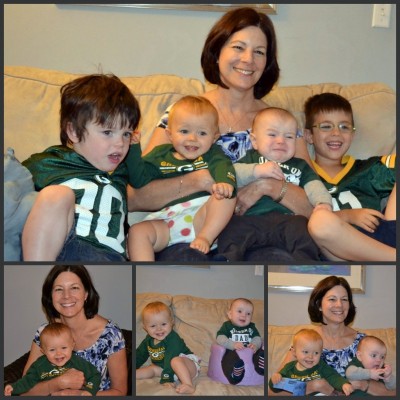 But we finally got a shot of Bana’s entire bunch: 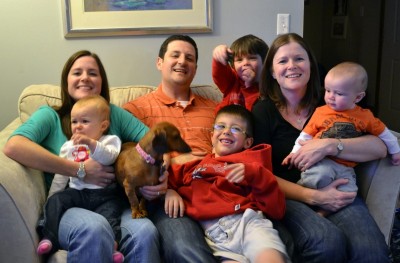 We had a great visit and look forward to seeing the Wisconsinites again soon!

Pete is very excited about the first Patriots game!  He’s wearing his first hand-me-down from his big sister too … my sister had bought the outfit when I was pregnant with Brienna but when she couldn’t use it, decided to save it for the next mini Marr.  And here he is:

GO PATS!  And thanks Kris … we love you!

Pete had an eventful Labor Day weekend – he is quite a busy baby!  We started off the weekend with his friend Kate’s 1st birthday party in Hull: 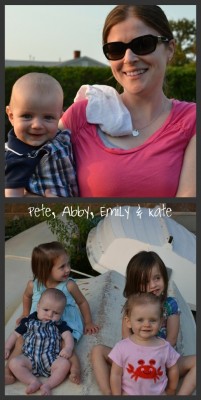 Then it was on to the Cape for the rest of the long weekend.  Though we didn’t have the best weather, we had lots of fun.  The main event of the weekend was a bonfire at Nauset Light Beach.  There are only four permits allowed per night (and they go fast) so we were very happy to get one.  We had done a fire last year as well, but this time we knew what we were doing and had quite the setup.  Our group expanded from just us Marr’s to include my mom, Kris and Shay, my Aunt Patty and Uncle Steve and my cousin Steve and his girlfriend Marissa, making it even more fun! We had snacks and drinks, cooked burgers and hot dogs on a charcoal grill, and of course made s’mores at the end of the night.

The rest of the weekend was spent relaxing at the Marr’s house and as usual, we thoroughly enjoyed our little getaway! 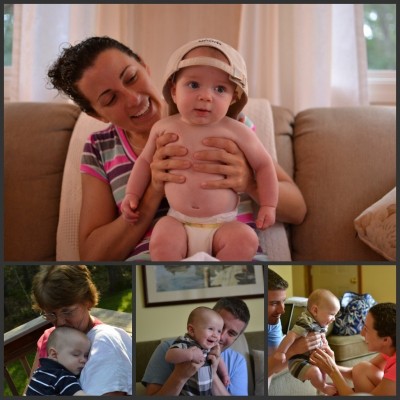 We finally sent Pete’s birth announcements!  I’m not exactly sure what took so long, but I think it was worth the wait: 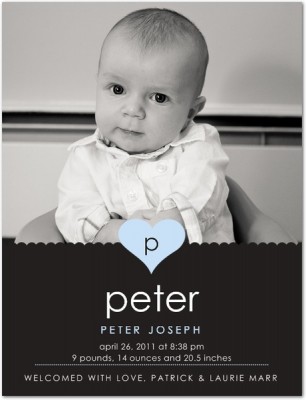 Pete had his checkup today and is looking good!  He weighed in at 15 lbs. 12 oz. and is 25.5 inches long … the doctor said he is doing great and that he acts more like a 6 month old than a 4 month old!

Here’s a video of Pete rolling over:

Have a great weekend!