Our biggest little man is 3!  I literally cannot believe he is already three years old.  We celebrated his birthday with a trip to the NE Family Fun Festival and then a “party” at our house with our parents and sisters. Pete was spoiled rotten with presents, and is so lucky that his family loves him so much!

Pete goes to preschool three days a week and loves it.  He can be shy at times when he first meets people, but his teachers jokingly call him “the president” because of the way he charms them.  Pete makes them (and us) laugh on a daily basis.  He talks nonstop (literally) and has the worst RI accent – we are hoping to rid him of it soon!  He tells these tall tales that sometimes make no sense to anyone but him; his imagination is incredible and constantly amazes me.  We love watching him play with his trucks and/or animals and listen to the stories he makes up as he plays.  Pete asked that when he turns 26, he get a a tow truck and two broken cars for his birthday.  He requested a wagon for his third birthday, which was much more reasonable 🙂

We took him to the Mystic Aquarium for his birthday, and he loved exploring everything.  He of course liked the blue jellyfish the best and as we were walking around, he told us “this place is wonderful!”

Pete is a sweet boy.  He has so much empathy for others, and is always trying to make people (and animals) feel better. He is compassionate and loves to help people.  He is also very funny and smart.  I am thankful Google exists because some of the questions he comes up with stump me!  Pete is incredibly strong-willed and stubborn (no idea where he gets that from).  He likes things his way, and his way only.  If I finally convince him to do something, he’ll let out this resigned sigh and say “ooookay, Mom” as if he’s 13, not 3.

Pete is thriving in his new role as big brother.  He loves James and he loves to help take care of James.  When James cries, he stops what he’s doing and sings “Twinkle Twinkle Little Star” while standing as close as possible to James.  It’s pretty cute!  He’s also asking lots of questions about Brienna, and when we passed a cemetery recently, he asked if he and doggie (his constant companion) could go to Heaven and visit her.  He was so sincere and so sweet; it broke and melted my heart.

We love our sweet Pete and are so proud of him! 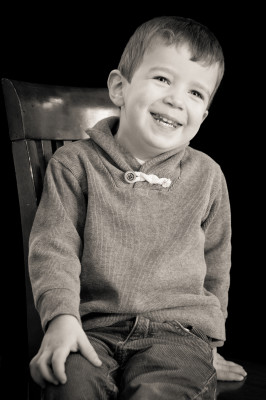 It’s hard to believe James is already two months old!  He had his well visit at the pediatrician this morning and weighs 12 lbs. 6 oz. and is 22 inches long.  James is a pretty content little guy. He is smiling a lot now, and it’s the cutest thing ever.  He coos and “talks” and we love it! I forgot how mesmerizing a baby can be.  There are many days I don’t get much done at all around the house because I just stare at him! James loves his brother and will dish out the biggest smiles for him. James is truly a beautiful baby and we’re loving every minute with our happy littlest guy! 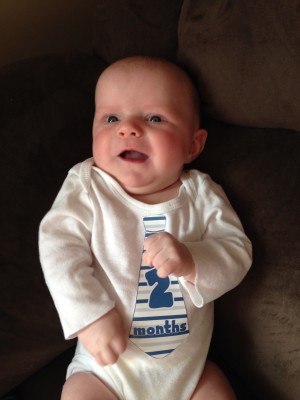 Happy Easter from our adorable little bunnies to yours! 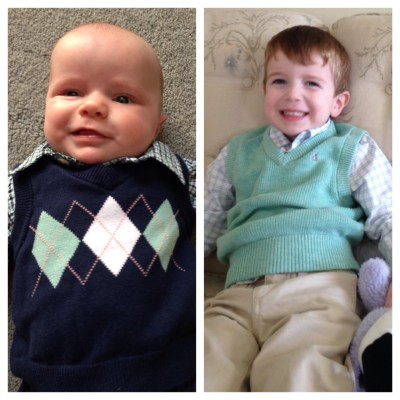 We went to a “Touch a Truck” event this morning,  which is pretty much Pete’s dream come true!  There were fire trucks, police cars, dump trucks, excavators, city buses and school buses to name a few. Pete was a little shy to start the day, and didn’t want to actually go in any of the vehicles, but he warmed up pretty quickly and as long as there wasn’t a big crowd, he climbed right on/in.  His favorite activity of the day was a train ride on “Thomas” around the parking lot.  It was the first thing we had to do, and he was so excited about it.  We had a fun morning and look forward to many more events just like it! 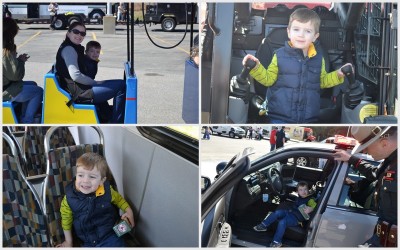