Pete started preschool again today, and could not have been more excited. He went to the same school last spring, and when I asked him what he was most excited about, he said “playing with the Paw Patrol toys”. But after orientation on Monday, when he got to see some of his friends from last year and meet some new friends, he decided he was most excited about playing with his friends. He was very sad to learn two of his friends are now in Kindergarten, and informed me that he will “never ever go to school every day” … hopefully he changes his mind by next year!

Pete seems to have grown up overnight. He literally woke up from a nap a few weeks ago and Pat and I were both convinced he had a growth spurt. All of his pants were suddenly too short and it’s like he’s this grown up version of himself …  he is 4 going on 14, no doubt about it! 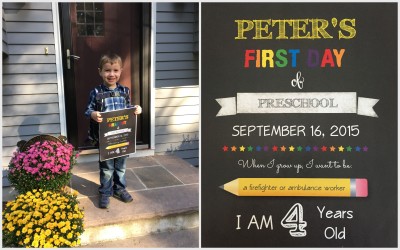 James didn’t want to miss any of the action, and quickly jumped into a picture too: 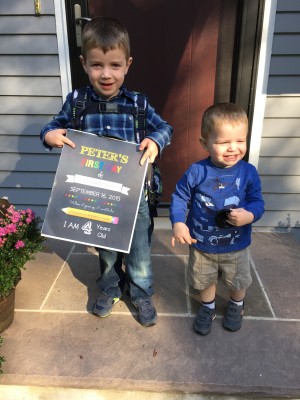 When we dropped Pete off, James made himself at home, pulling out a chair and sitting down to color. When I broke the news that Pete was staying at school and we were leaving, he ran right up to Pete and said “I love lou”. It was so sweet! Pete gave us both hugs and a wave and that was that.

At pickup, he told me he had an “awesome” day and that he wants “more school days and less mama days, because school is a lot more funner”. My heart may have cracked a tiny bit, but I couldn’t be happier that he likes it so much!

Pat and I are so proud of Pete. He’s a funny, smart, kind, confident little boy and we can’t wait to see what’s in store for him this school year!