Pete went to visit Auntie Liz at work today.  Liz works at Harvard, so after we ‘pahked the cah in Hahvahd yahd’ (literally) we made our way to see Liz’s office.  Pete was quite the little celebrity and it was pretty awesome that so many people recognized him.  I think his aunt likes him.  When we got to Liz’s desk, Pete saw the picture of himself on the monitor and said very excitedly, “baby!”  Here he is hard at work at Liz’s desk: 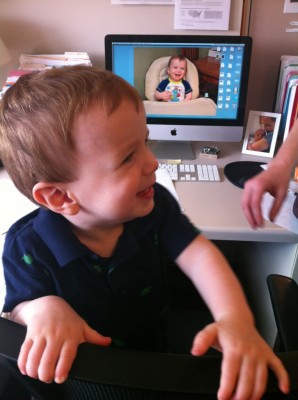 One of Liz’s coworkers, Dayna has a niece Pete’s age. We’ve heard lots about Ayla and finally got to meet her and her family today!  She just turned one and is adorable.  It’s always fun to see Pete with kids his age.  He went right for her shoes and tried to take them off, it was very cute.  We had lunch in the sunken garden and while Ayla sat quietly reading her book, Pete had to be contained.  There was a fountain nearby (he kept asking if it was a bath) and knowing Pete, I think he would have tried to climb right in. 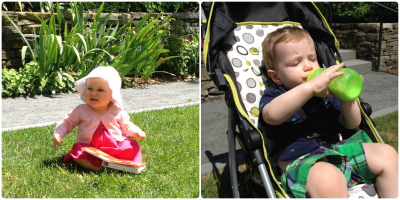 After checking out the Curious George store, we went to Starbucks for an afternoon treat.   Mrs. Johnson managed to get a shot of the whole group (Ayla and her Aunt Laura with Pete and I on the left, then Dayna & Ayla, Ayla’s mom Erika, Laura, Pete & I and Liz on the right): 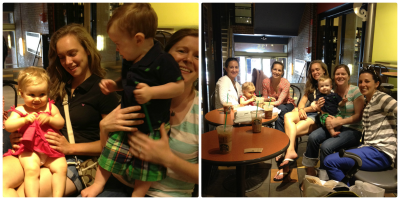 We had a very fun afternoon in Cambridge.  Every time I’m there, I wish we could spend more time checking out all the cool shops in Harvard Square.  There’s so much to see and do and it was just a perfect day.  Thanks again to Auntie Liz for having us; we can’t wait to come back again soon!

Pete had a special guest babysitter last night – Uncle Shay-Kay. Pete loves Shay.  Even when he was a newborn, he’d hear Shay’s voice and would stare, fascinated by his Irish brogue.  Pete gets so excited when he sees Shay and usually makes a beeline right for him.  They get to hang out pretty often, but last night was the first time it was just the two of them.  I knew Seamus was perfectly fine to babysit, but wasn’t keen on changing a poopy diaper.  So, I reassured him that he was probably off the hook because Pete had already pooped.

Pete was pretty excited to have Shay all to himself; they played and had dinner but when it came time for bed, Pete didn’t want to go to sleep.  He was just too excited.  Shay decided to take video because it was pretty cute.  He also captured this:

I love this video for so many reasons: Pete is so excited and his dancing cracks me up; he says “Shay-Kay” which is just adorable and of course, his unmistakeable poop grunt – he is such a boy.  I’m not sure what Shay’s reaction was when he saw what was going on, but he handled it like a pro and Pete was clean as a whistle when he woke up this morning.  Pete’s a lucky little guy to have an uncle that loves him so much … we can’t thank Shay enough for babysitting the little man.  And now that we know he’s an expert diaper changer, we’ll be calling on him more often!

Pete is constantly on the go.  Most days, he barely sits still.  I cherish the moments when he cuddles with me because I fear/know they will happen less and less as he gets older.  I went out tonight with my mom and Kristen, so Pete stayed in Canton with Birdie.  Things took a little bit longer than I anticipated, so when we got home, I expected to find a slightly fussy, very tired boy.  Instead, I found this: 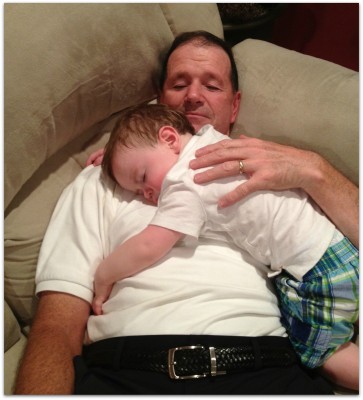 Pete was fast asleep – sweaty, snoring and completely content. I think Birdie was as amazed as I was that he not only fell asleep, but stayed asleep.  It was adorable and I think it’s true what they say … a picture really is worth a thousand words.

It’s been a busy few weeks in the Marr household, and I’ve clearly been slacking with posting updates!  Suffice it to say, Pete is the best.  He is just about 14 months old and gets cuter every day.  He talks so much and repeats just about anything you say, which can be dangerous at times!  Off the top of my head, Pete says down, car (still with a Boston accent), baah (for bottle), Bailey, baby, socks, shoes, ppp (when he wants to be picked up), wow, bang, brush, mama, dada, go-go-go, and no-no.  He loves Pat’s ID badge for work and every morning as Pat’s getting dressed, he says “badge?”  When he sees something he likes he says “ooohhhhh”, when he falls he says “boom” and when he stands up without holding on to anything, he looks around, says “whoa” and then eases himself back down.  He’ll walk eventually!

Here are some pictures from the last few days: 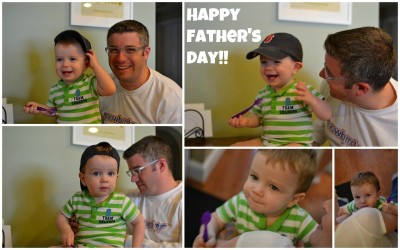 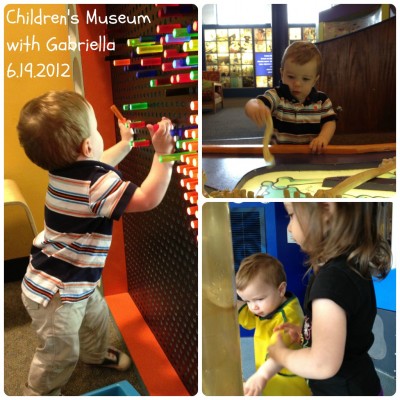 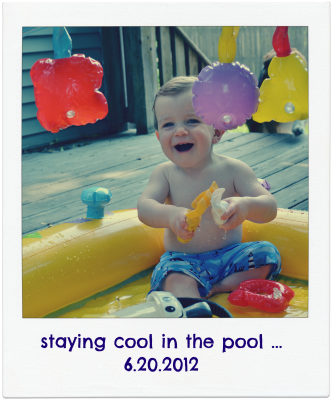 Every day with Pete is fun; he’s changing and growing so fast … he really is such a good-natured guy and I can’t get enough of him!

It’s hard to believe our little girl would be three years old today.  Not a single day goes by that I don’t think about her and wish she was here with us.  Watching Pete grow and learn has brought so much joy to our lives, but also makes me sad for all that we missed with our sweet Brienna.  I fantasize about cuddling with her, giving her hugs and kisses and I long to hold her again.  Even just for one minute.  I miss her so, so much and the weeks leading up to her birthday are especially difficult … I feel the pain of losing her as acutely as if it happened yesterday. 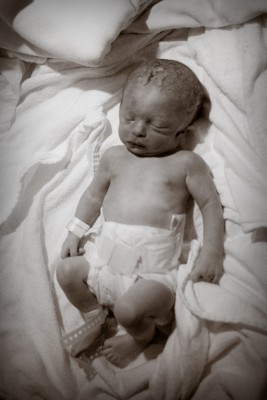 We celebrated Brienna today though.  It’s her special day and as much as June 2 makes me sad, I’m so happy that she has one day that is hers, and hers alone.  We did a family 6.2 mile run this morning in honor of her birthday.  I love running in her memory and it’s my dream someday to organize a 10K and hold it every year on/around her birthday. 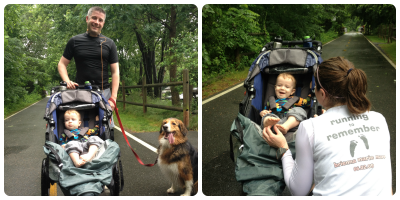 So many of our friends and family members thought about Brienna today and sent us messages to let us know; I wish I could express how much that means to me.  I love that her memory lives on and that she made such an impact on the lives of so many people, some who never had the chance to meet her.  She is a special little girl.  When we visited her bench this afternoon, we left three balloons and her dad gave her a single pink rose.  The plants are from her grandparents and I think anyone looking would instantly be able to tell how loved she is.  I can only hope she feels our love too. 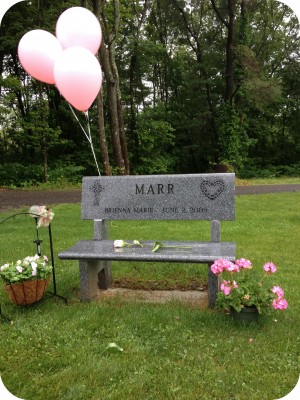 “Loved with a love beyond telling,
Missed with a grief beyond all tears.”