Halloween is without a doubt my least favorite holiday. I have never been a huge fan, but as I’ve gotten older I seem to like it less and less.  It stresses me out (due in large part to a barking dog named Bailey) but just in general, I don’t like scary things and I don’t like being spooked.

This year however, was a different story. I didn’t think Pete would be super interested in the holiday itself, but we talked about it and read books about it and told him about his awesome Bob the Builder “costume”.  We told him about trick or treating and jack-o-lanterns and figured we’d just see what happened for the day.  The weather wasn’t supposed to be great, and I was totally okay with that!

When Pat came home from work, we convinced Pete to wear his “costume” and decided we’d walk around the neighborhood to see what he thought.  He totally surprised us and loved it!  He loved ringing doorbells and holding out his pumpkin for treats, he loved saying trick or treat and I think his favorite part of the night was that he got to use a big boy flashlight (just like dada) as we walked around. 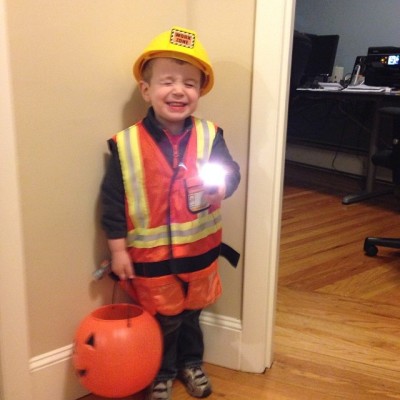 He wore that expression pretty much the rest of the night and it was adorable.  He kept asking to go to “one more house” and Pat and I both had a great time with him.  I continue to be amazed by how different the world is through the eyes of a toddler. For the first time ever, I think I actually enjoyed Halloween.  It’s hard not to with our little ham around 🙂

And just because, a cute picture of Pete before the Jack-O-Lantern Spectacular a couple of weeks ago.  The whole PC gang met up to see the pumpkins and we had a lot of fun! 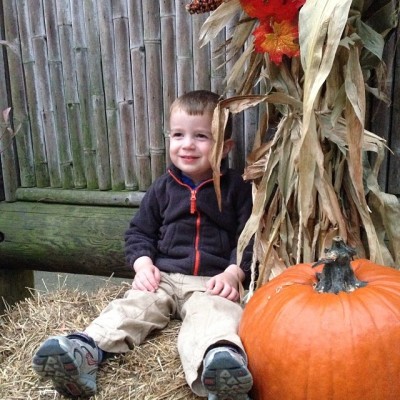