I have sooo many half written posts that I need to finish up, but figured there’s no time like the present to at least post something! The blizzard of 2015, aka Juno, dumped about two feet of snow on us … it’s a winter wonderland out there and the boys and Bailey loved playing in the snow.  I forgot how excited Bailey gets about snow, and it was fun watching her enjoy herself – and make us all laugh in the process!

Pat spent most of yesterday digging us out. The boys loved watching him with the snowblower and the end result (of round one) was rather pretty – which is easy for me to say, since I didn’t spend all those hours making it look that way: 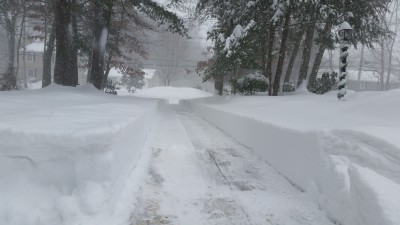 Pete, James and I had yesterday and today off, which was such a nice treat. We knew about the storm ahead of time, so we were appropriately stocked with milk, bread and all the ingredients to make cookies, and made the best of being snowbound. Pete loves the snow, and loves being outside, no matter the conditions or the temperature. The minute we stepped outside, he launched himself (face first) into the snow. I don’t think he expected it to be so deep, because when he stood up, he said “umm, Mama? Who turned out the lights?” You did Pete. You did:

Pete desperately wanted to play with his toys in the shed, and gave it his all trying to dig them out. He made decent progress before tuckering himself out, and then brushed off my car “because Dada didn’t really do a good enough job” (really, he did) and climbed snow mountains: 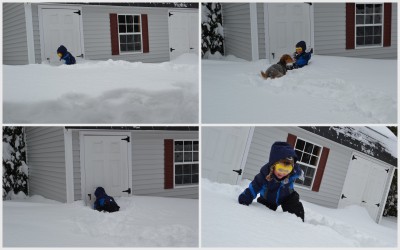 There was so much snow that if we dropped James, there’s a good chance we would have lost him! Luckily, that didn’t happen 🙂 The little guy loved the snow at first, and tried to eat it by the fistful, but quickly tired of not being able to do a whole lot. He sure did look adorable though:

All in all, I’d say our first blizzard as MA residents was a success!